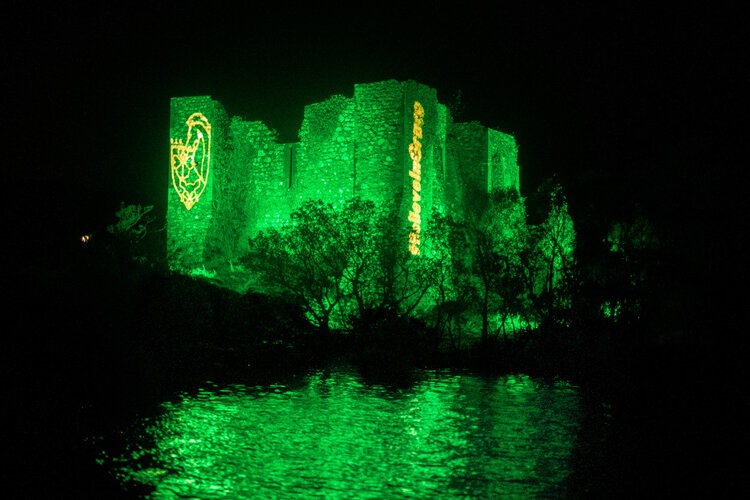 Hen’s Castle, situated on a rocky island in the northern lake of Lough Corrib is no stranger to mysterious lights. As legend goes, they coincide with that of a local’s passing. Rather than flickering lights, a more recent illumination saw the whole castle aglow in vibrant green. Its reflection was cast across the lake and visible for miles around. It can now be revealed as the work of spirits of another kind, Grace O’Malley Spirits, the premium Irish whiskey brand dedicated to Granuaile, also known as Grace O’Malley.

What was the story behind it all?

#KeepHerLit at Hen’s Castle saw its old limestone walls emblazoned with #BelieveinGrace and the Grace O’Malley crest on a backdrop of bright green. The lighting is part of Grace O’Malley Spirits now annual salute to the arrival of Samhain. It also marks a month of birthday celebrations through November for Grace. Grace O’Malley is Hen’s Castle most famous resident and from whom the castle got its name. #KeepHerLit at Hen’s Castle follows last year’s lighting at another of Grace’s strongholds, Rockfleet Castle on the shores of Clew Bay. Rockfleet Castle was lit on Halloween night in advance of celebrations and we’re delighted to have been involved with both events!

As with last year’s event, we teamed up with Grace O’Malley Spirits to offer our lighting services to make the Castle shine. What do you think of the end result? We love to work with brands who go that extra mile to get their message across. They have an interesting story to tell and events like this go a long way in showcasing their special piece of history.

The history of Hen’s Castle

The story goes that hundreds of years ago, the O’Flaherty’s hired a witch to build Hen’s Castle. She used her magic to overcome the huge task involved in building a fortress of this size in the middle of a lake. Afterwards, the witch left a hen to guard the castle. She warned that the hen must be looked after in order to keep the castle secure. When food became scarce, the O’Flahertys had no option but to eat the hen. It was shortly after this that the castle was lost under attack from the Normans. Steeped in history, myth and legend, Hen’s Castle is one of the oldest fortresses in Ireland. It is regarded as one of the country’s best-built Castles. It is an extraordinary feat in engineering considering its age and location. What is impressive today even in ruin must have been truly awe-inspiring in its heyday.

We were delighted to be able to work once again with Grace O’Malley Spirits on this fabulous brand activation. We once again showed our ability to innovate and provide the highest quality of results for our clients. If you would like to speak to our team about what we can do for your next brand activation, please email info@soundtolight.ie